"If You Defend The Republic, You Will Keep It" 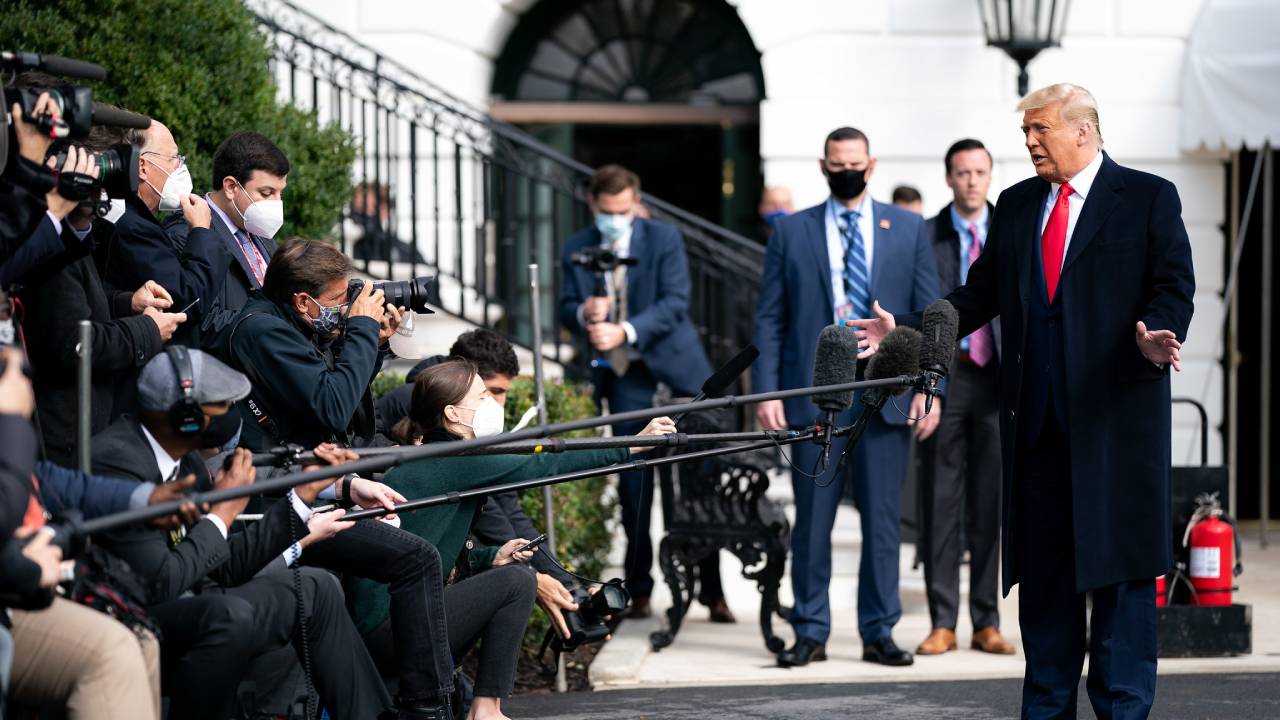 President Donald J. Trump talks to members of the press along the South Lawn driveway of the White House Friday, Oct. 30, 2020, prior to boarding Marine One en route to Joint Base Andrews, Md. to begin his trip to Michigan, Wisconsin and Minnesota. (Official White House Photo by Tia Dufour)

Nov. 9—As the battle intensifies to reverse the coup against President Donald Trump, with the contesting of the vote fraud conducted on behalf of the candidacy of Joe Biden, LaRouchePAC sponsored an online forum on Nov. 7, which detailed specific areas of fraud which must be investigated, and its perpetrators prosecuted, as well as outlining the broader context in which this coup has been run. The forum can be viewed here. As Biden proclaimed his victory, based on a determination made by the Associated Press, President Trump made it clear that he will not accept this decision, which defrauds the American people of their most sacred right, the right to an honest election.

Trump stated that it is the American people, “through legal votes,” who determine who is the President, not the media. “I will not rest,” he said, “until the American People have the honest vote count they deserve and that Democracy demands.”

ELEMENTS OF FRAUD TO BE INVESTIGATED

In the online forum, LaRouchePAC legal analyst Barbara Boyd detailed examples of specific evidence of fraud which require a thorough investigation. A preliminary investigation has already resulted in a number of legal actions filed on behalf of the President, with many more to come. Such an investigation, she asserted, will show that Donald Trump won re-election.

Among the issues identified as needing further investigation include:

Former Illinois Gov. Rod Blagojevich (D), who was framed by the same DOJ which was involved in the Russiagate coup against Trump, said that stealing elections “is a time-honored tradition in Democratically-controlled cities like Chicago, my home town, and Philadelphia…. Coming out of the Chicago Democratic establishment, I know how they operate.” He said this occurs in the “wee hours of the morning” and is done “with impunity because the media is looking the other way.” Examples of such tactics, which include dead people voting, are under investigation, as there are confirmations in some cases already in Pennsylvania and Nevada, where it has been determined from a preliminary search through the records that more than 3,000 dead people and non-residents, who moved away from the state, had votes recorded in their names.

Another tactic which was used is preventing Republican poll watchers from watching the counting of mail-in ballots, to determine their legitimacy. This occurred in Pennsylvania, even after a court order was issued that poll watchers be given full observer rights. It also has been verified in Michigan and Atlanta.

Also subject to legal action is the decision in Pennsylvania which reversed the policy set by the state legislature for the deadline by which votes are allowed. A court action to extend the deadline, which allowed a large volume of late ballots to be counted, violates state law, under which only the elected legislature may make such determinations. There is also evidence that a USPS Postmaster may have approved of back-dating the postmarks of mail-in ballots, so that ballots received after the lawful deadline of November 3 could be presented as having been received by the original deadline.

Among those insisting on a full investigation is Trey Trainor, the Chairman of the Federal Election Commission. Trainor said he believes there is “evidence of fraud in Pennsylvania.” He cited the refusal to allow observers to monitor the counting of mail-in ballots, saying, “I do believe that there is voter fraud…. Otherwise, they would allow observers to go in.”

SETTING THE STAGE FOR FRAUD

The role of the “mainstream” anti-Trump media: It is additionally necessary to look at how the population was prepared for fraud. Part of the set up included the daily proliferation of fake poll numbers, which proclaimed Biden a certain winner, with a lead between 6 and 12%. This was designed to suppress the vote of Trump supporters, by convincing them their candidate could not win. It did not work, as Trump supporters turned out in historic numbers. The media also ran repeated stories claiming Trump would not accept the outcome, rejecting his call for an honest count as the complaint of a sore loser, who might have to be removed from the White House by force. This was used to mobilize potentially violent street demonstrations against Trump, and to incite a military coup to remove him! They also prematurely called states for Biden, even when Trump held large leads.

Pre-Election War Games: The Transition Integrity Project, which included leading Democrats and anti-Trump Republicans, ran “war games,” to prepare for the prospect of a Trump victory, and how to overturn it. In the scenario they ran, John Podesta portrayed Trump, and insisted he would not step down, necessitating a military intervention to remove him. This is the same Podesta who was at the center of the claim that Russia hacked computers in 2016 as part of their alleged pro-Trump meddling, as the FBI claimed his computer had been hacked. It was eventually confirmed that neither his, nor Hillary Clinton’s, nor the DNC computers had been successfully hacked, but that evidence was withheld for more than two years.

WHAT IS AT STAKE

In summarizing the implications for the American republic if this fraud is allowed to stand, Wiebe said the following: "It’s a bloodless coup, and it’s very clear that it was all planned. It is not chaos; what chaos we have seen was planned chaos within a larger context. The mass corruption in voting that we’re seeing is not just the HAMMER and SCORECARD. It’s ballot stuffing, the mass mailings of ballots to whomever; all of this are parts of a larger voting corruption scheme. One that includes programmed altering of votes in a semi-automatic fashion, based on certain thresholds and then release of changed numbers. That’s a little different from HAMMER and SCORECARD. But also, manual changing through remote access into the tallying machines is another method. Using false or illegal or bogus log-on administrative privileges on those computerized vote counting machines.

“So, we have a multiplicity of different facets of corruption all going on in a mass attack on our voting system.” He concluded as he has on previous occasions, that the perpetration of such actions is the beginning of a civil war, which could lead to the end of the American republic.

The broader historical context of this threat was presented by Helga Zepp-LaRouche, in tracing the roots of the American republic to the introduction of the idea of national sovereignty, by the 15th-century scientist and philosopher Nicholas of Cusa. It was Cusa’s development of the concept of national sovereignty which guided the thinking of America’s Founding Fathers. Zepp-LaRouche said, “…when the American Revolution occurred, which was explicitly against the British Empire … this was a breakthrough. It was a complete watershed in universal history, because the American Constitution, the Declaration of Independence, established for the first time this idea that the government is devoted and obliged to the governed, to the Common Good, not only of the present generation, but of all future generations.”

The question of sovereignty over a nation’s economic and financial policies is crucial, as Trump took the U.S. out of the Paris Climate Accords and the Trans-Pacific Partnership free trade agreement, in a reassertion of economic sovereignty. Boyd pointed out that Biden pledged his first acts would be to issue an executive order to bring the U.S. back into the genocidal Paris Climate Accord, as part of imposing the industry-killing, energy-reduction, destructive Green New Deal, and he would revisit the trade deals vacated or opposed by Trump.

On Nov. 7, both Harley Schlanger and Zepp-LaRouche pointed to the plans of the City of London and Wall Street financiers and their shadow-banking allies, to establish a global digital currency as part of a “regime change” in financial policy, giving central banks the power to insure torrents of cheap credits to speculators or create consumer spending and inflation, while undermining commercial banks as savings institutions or agencies which can provide investment and credit to local and regional manufacturing and businesses. Biden has a long history as an errand boy for the “Too Big to Fail” banks, through his home state of Delaware, and he received a huge amount of funds from Wall Street, and green fascists such as Sir Michael Bloomberg.

All the speakers referred to the ongoing mobilization in many American cities and towns as evidence that this fraud will not be accepted, and encouraged all to join the mobilization, in peaceful but determined actions, to ensure an honest vote count. As Wiebe pointed out at the end, the republic and our constitutional system may be doomed if the vote fraud — committed by those favoring the unconstitutional policies outlined above — is not reversed.